The market's close on March 31, 2022 continued to show that volatility reigned in the first quarter of this year. While we saw some improvement over the past few weeks the vast majority of all asset classes are negative for 2022. Whether aggressive or conservative the impact was felt across the board. However, this is what we have been expecting and working to weather.
Facing the highest inflation in 40 years, the Fed did not disappoint the markets in March when they raised rates 0.25%, but they should have raised them 0.50%. We believe that the Fed is truly behind the curve and the current geopolitical situations are exacerbating inflation. Several Federal Reserve voting members indicated earlier this week that a 0.50% rate hike is likely in May and quite possibly in June. Currently, the 10-year Treasury yield is sitting at 2.41% and the 2-year Treasury yield is sitting at 2.43%. Historically, such an inversion has predicted a coming recession. We expect that by year end the 10-year Treasury yield will be around 2.5%, maybe 2.75%.

The consumer is not slowing down, at least not yet. Last week I visited several Lowes, Walmarts, and a Sam’s Club. Each was full of people, with maxed out parking lots, and backed up registers. I do not expect the consumer to slow down until mid to late third quarter in anticipation of Christmas spending. If you have not booked your accommodations for your summer vacation, good luck! Despite extremely high gas prices, vacations are a high priority for everyone this year. This spending will carry the economy for the vast majority of 2022. The spending of disposable income or disposable credit will drive sales despite shortages and continually rising prices, which in turn will provide a fragile floor for the equity markets.
People are out spending money and paying the higher prices, willingly. Try booking a hotel room, rental car, or a flight - you will get sticker shock! But you better hurry, as they say there are only a limited number left for that particular time period. It is a fact that this year people are going on vacation. They will pay more, but they are paying with disposable income or disposable credit. With yesterday’s close, Lowes is down just over 23% from its all-time high in December. Have you been to a Lowes hardware lately? They are not giving lumber away, and they are going into one of their best times of the year - the spring and summer garden season. This is where patience and focus on your long-term investment strategy comes into play. Buy good, high-quality, financially strong, dividend paying companies and let time take care of the weather. I saw a quote yesterday that said, “Always remember, nothing lasts forever. Even the bad times, won’t last forever.”

Oil, while off its recent highs, is still hovering around $100 per barrel. Despite the just announced release of the Strategic Petroleum Reserve, we think the price will probably trend higher over the next few months as we get into the summer driving season. I have said many times oil touches everything, and when it becomes more expensive the increase is passed along compounding inflation.

Based on the previously discussed factors, we expect inflation to continue to be a serious issue for the remainder of the year. We will likely see higher inflation numbers in the upcoming months before we see a decrease. It will not be resolved in 2022 but will most likely be tamed by mid-to-late 2023. This will be the result of the removal of stimulus, interest rate increases, supply chain restorations, the alleviation of ‘cabin fever,’ a slowdown in consumer spending, and a resulting recession. Don’t get too nervous, keep reading! Right now our economy is extremely strong, the consumer is spending, and doesn’t appear to be letting up for at least the next six months. I am not sure how or where the ‘Wall Street Experts’ do their due diligence, but mine is done by looking at everything, everywhere I go.

Oil prices have been on everyone’s mind lately. The announcement on March 31, while a potential band-aid, doesn’t address the longer-term needs for the U.S. and our allies. As long as Europe is subject to Russian energy, they will always be under the coercive powers of Russia. While we can’t immediately, or possibly ever, supply all of their liquefied natural gas needs, we can increase the supply options that they have within a reasonable period of time. More importantly, what about our independence from the Organization of the Petroleum Exporting Countries, and why in the world would we ever make a deal with Iran? Our country is rich with resources and while we need to be good stewards of those resources and land, we need to take care of us first, our friends second, and others last.
We think volatility will remain, especially as long as the Russia vs Ukraine war continues. In addition, the focus on the Fed’s management of interest rate hikes (percentage/frequency) and negative news regarding COVID will only add to the volatility. We think there is a possibility that we do see a positive return for the equity markets, which probably will materialize in the fourth quarter. We do believe that a recession is on the horizon, potentially starting in late 2022 into early 2023, but it should be mild. It will likely be over before it is officially declared to have been a recession.
Economic commentary - q4 2021
Investments managed by KS Bank’s Trust Department are: Not Insured by FDIC or Any Other Government Agency | Not Bank Guaranteed | Not Bank Deposits or Obligations | May Lose Value 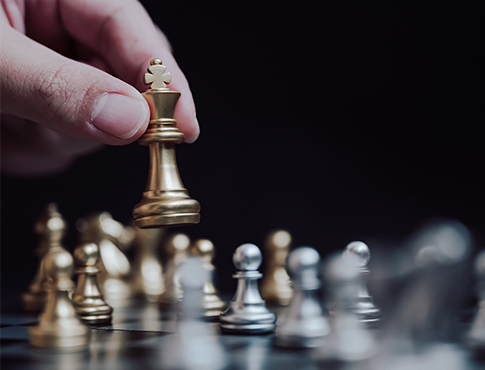 Wondering what your next investment move should be?

We can help answer that question and then manage the intricacies with data-backed recommendations. When it comes to investing, we understand it’s complex.
Learn More - Investment Options